Latest Blogs
Home beauty Spot on: how to wear leopard print to work if you’re a man 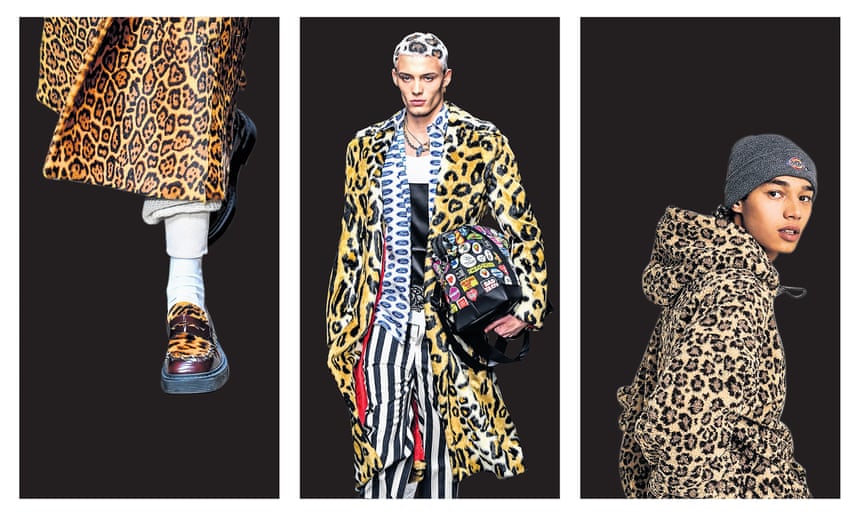 Spot on: how to wear leopard print to work if you’re a man

Is there a time and place for men to wear leopard print? I have always thought so – and that time and place is if you are Richey Edwards in the Manic Street Preachers circa 1993. Outside of that context, leopard print is intimidating. It is a statement of the kind most men get self-conscious about. Yes, it looks great on Keith Richards, but it also looks faintly ridiculous when you are mooching around the tea point at the Guardian.

There were, inevitably, some funny looks when I wore it for a day at work. But was that the print? Or because I was wearing a blousey number with half my chest on show in the middle of winter? It’s hard to say. But after half an hour, I started to relax into it. And then I noticed all the women in the office effortlessly wearing their animal-print skirts, scarves and dresses. Surely us guys should get to enjoy it, too, without freaking out?

I decide that I would definitely give leopard print another go. I could imagine wearing it as a coat lining, or on a slightly more suitably tailored shirt … maybe even on a luxurious sweater. It might be a little while before I treat my colleagues to a second look, though. Tim Jonze

The menswear expert: “You will need to mentally prepare yourself …”

There was a moment in January, about halfway through the Versace menswear show, when a model emerged in a larger-than-life leopard-print coat complete with a coordinating hairdo. Yes, that’s right. Leopard hair. Later, on her Instagram feed, Donatella Versace posted a shot of herself and said model with the caption “the hair-coat match was everything”.

Despite many of the recent autumn shows being tales of sedate elegance where suits were front and centre, animal patterns, in particular leopard, offered a necessary bite. Raf Simons showed an almost floor-length coat of leopard in a ballroom in Paris. At Marni, leopard appeared on loosely shaped trousers as coats, trims, hats and shirt hems peeked out from beneath knitted layers. Hedi Slimane’s debut men’s collection for Celine also included a leopard coat, while a selection of footwear featured this splashy pattern.

As someone who has never entertained leopard, and pretty much lives in jeans, it threw me.

Of course, the idea of men wearing leopard print is not unheard of. But, like many things in men’s fashion that deviate from the conservative, it still has the potential to raise eyebrows. Yes, we have all seen Rod Stewart, Brian Eno and Bryan Ferry working leopard print, while images by Jesse Frohman of Kurt Cobain in a leopard coat, jeans, trapper hat and white sunglasses prove that leopard and denim are excellent bedfellows. But still …

Regardless of what you think, it’s happening. At Asos, there are 143 items listed (you will need to mentally prepare yourself for the sight of leopard briefs). Zara’s classic leopard shirt would work over a white T-shirt or under a grey V-neck knit, untucked, a tad grungy. Or perhaps a muted leopard Our Legacy cardigan, thrown over a denim shirt, is another easy way in. See also All Saints, known for indie lead-singer tendencies, whose animal-print offerings include a simple leopard T-shirt.

I am definitely intrigued. And I definitely want to try that Simons coat on with some urgency. Whether that means I am sold remains to be seen. But if the likes of Timothée Chalamet and Michael B Jordan can wear designer harnesses on the red carpet, why not leopard print? Roll on Oscar night. Chalamet in Raf Simons leopard? Oh, go on then. Simon Chilvers

This article contains affiliate links, which means we may earn a small commission if a reader clicks through and makes a purchase. All our journalism is independent and is in no way influenced by any advertiser or commercial initiative.
The links are powered by Skimlinks. By clicking on an affiliate link, you accept that Skimlinks cookies will be set. More information.

… we’re asking readers to make a new year contribution in support of The Guardian’s independent journalism. More people are reading and supporting our independent, investigative reporting than ever before. And unlike many news organisations, we have chosen an approach that allows us to keep our journalism accessible to all, regardless of where they live or what they can afford. But this is only possible thanks to voluntary support from our readers – something we have to maintain and build on for every year to come.

This is The Guardian’s model for open, independent journalism: free for those who can’t afford it, supported by those who can. Readers’ support powers our work, giving our reporting impact and safeguarding our essential editorial independence. This means the responsibility of protecting independent journalism is shared, enabling us all to feel empowered to bring about real change in the world. Your support gives Guardian journalists the time, space and freedom to report with tenacity and rigor, to shed light where others won’t. It emboldens us to challenge authority and question the status quo. And by keeping all of our journalism free and open to all, we can foster inclusivity, diversity, make space for debate, inspire conversation – so more people, across the world, have access to accurate information with integrity at its heart. Every contribution we receive from readers like you, big or small, enables us to keep working as we do.

The Guardian is editorially independent, meaning we set our own agenda. Our journalism is free from commercial bias and not influenced by billionaire owners, politicians or shareholders. No one edits our editor. No one steers our opinion. This is important as it enables us to give a voice to those less heard, challenge the powerful and hold them to account. It’s what makes us different to so many others in the media, at a time when factual, honest reporting is critical.

Please make a new year contribution today to help us deliver the independent journalism the world needs for 2019 and beyond.

The New It Bag Holds One AirPod. To read more click lovekiev.com