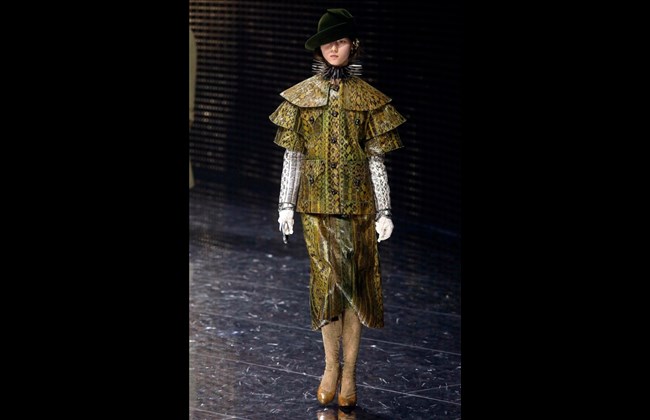 Masks of all shades, shapes and sizes took over the Gucci catwalk Wednesday as the Italian luxury label kicked off Milan’s leg of the autumn-winter runway season with an eclectic show rich in patterns, colors and headpieces. Under a kaleidoscope of lights and surrounded by mirrors, Gucci Creative Director Alessandro Michele sent out models in headgear made up of partially and fully covering face masks, sometimes with spikes, extended ear cuffs, at times almost elflike as well as intricately carved bronze pieces.

Show notes were titled “The mask as a cut between visible and invisible” and guests were given a taste of what to expect with a papier-mache-like invite in the shape of a mask of Hermaphroditus.

“Playing with the magic ambiguity of masks represents an occasion to recover the creative roots of our being alive,” the press release read.

Colorful harlequin prints decorated various outfits, some tops were shiny and pleated, reminiscent of 1970s disco fashion, and bows were at times tied around the ankles on trouser suits, which came in large shapes, with waistcoats or ties for women.

The Kering-owned label, which has enjoyed booming sales under Michele’s makeover, also offered plenty of embroidered and shiny combinations. Coats were check, patterned or simple macs.

There was also a selection of all red outfits among the looks.

For men, there were loose pinstripe suits, cinched jackets, wide-leg or high-waisted trousers as well as an offering of colorful knits worn with patterned trousers.

Shirts had long collars while trousers were wide-legged.

Animal prints also decorated some of the show’s looks.

Luxury outerwear group Moncler presented the latest additions to its Genius scheme, launched a year ago, where designers have presented their own interpretations of the label’s puffer jackets.

This season, designers Richard Quinn, Matthew Williams of 1017 ALYX 9SM, Veronica Leoni and Sergio Zambon joined the project, presenting an array of colorful outerwear in various forms and lengths, including sleek as well as dress form.

“Moncler Genius is an answer to the times, a symposium of creative minds and an inspiring place,” Moncler Chief Executive and Chairman Remo Ruffini said in a statement. “Each Genius operates singularly and the sum of the Geniuses interprets the Moncler identity.”

Milan Fashion Week is the third leg of the monthlong autumn-winter 2019-2020 shows, which began in New York and also include London and Paris.

Milan is home to fashion heavyweights such as Giorgio Armani, Versace, Prada and Dolce & Gabbana.

Tributes have poured in from around the world for the man considered an industry icon, who was best-known for helping jazz up French couture house Chanel.

“He is one of the most iconic figures in fashion, most creative, generous,” Brazilian digital influencer and journalist Erika Santos said.