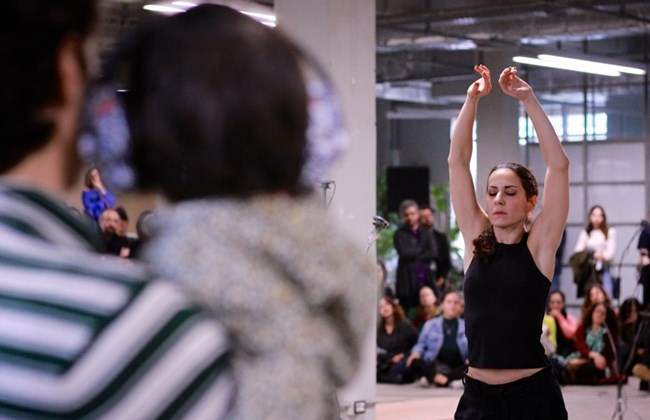 Making dance a space for reflection

After a measured series of pirouettes, Yalda Younes stands on the second of three rectangular stages. Her heels commence a rhythmic percussion that builds in intensity and volume as she inches up the runwaylike surface. The stage has been miked and the sensitive electronics collude with the force of Younes’ zapateado to shake the skeleton beneath your pelt.

The solo ends with the dancer rolling back onto the surface. She lies still for some minutes, arms and legs projecting into the air as if she wear in mid-fall.

The show appeared to have started before the audience entered.

Upon the first stage, Younes stood, lingering over postures reminiscent of her past work terse solo flamenco that, bereft of folkloric costuming and musical accompaniment, is sharp as broken glass.

Electric oud in hand, Khyam Allami stands a few meters away behind a pair of kettle drums and a laptop. Steeped in maqam and taqasim (Arabic classical music and improvisation conventions), the music of the Iraqi-born composer and instrumentalist applies razor wire to those traditions, reconstituting them from silence as succinct melodic flourishes.

The main hall of Ashkal Alwan Home Workspace is hosting Allami and Younes’ “A Universe Not Made For Us,” the first of two Saturday afternoon shows staged for Irtijal 19, Lebanon’s festival of experimental music. The work debuted in February at Brest’s Dansfabrik festival.

The artists practice distinct forms but they’ve a shared aesthetic a pared down, deconstructed-sounding reworking of classical forms that makes the collaboration as intriguing as it is intense and energetic. Marking Younes’ return to flamenco after some years’ break, the performance was avidly received by its Beirut audience.

As Younes navigates from one surface to the next, she never quite gives what the audience expects.

Precise, percussive movement is complemented by long moments of stillness (often holding poses that wouldn’t look out of place in yoga) and stretches of silent motion.

At various points she snaps her fingers, clicks castanets and, taking up a microphone, delivers a solo vocal in Spanish that sounds like a cross between crazed punk and flamenco cantor.

Allami’s composition oscillates from segmented bursts of oud that, after being interrupted by playback, coalesce into a dissonant melody that might be a synthesis of what’s come before. Oud and kettledrum solos play out in counterpoint to excerpts of prerecorded sound vocals, something like heavy drum’n’bass, finally a repeated, percussive note redolent of Arvo Part.

Silence is as integral to the score as stillness is to the choreography.

The text introducing “Universe” places the work in a “global context of chronic depression and massive political failures.”

Though the work doesn’t reference anything literal, the tensions and strains implied by “depression” and “failure” are evident throughout. Its silences and stillness are reminiscent of contemporary artists’ use of absence to suggest alienation and dislocation.

In post-performance conversation with The Daily Star, Allami and Younes stress that deconstruction alone isn’t their aim.

“We tried to look into the fundamentals of each of our respective forms, many of which turned out to be in common. … We were interested in silence, and wide dynamic shifts between very calm and very loud moments. This is very present in flamenco.”

She recalls that some observers remarked that the work is “too emotional or too dramatic, but this is something that I love about flamenco. In wanting to deconstruct or re-appropriate flamenco I don’t necessarily want to make it cold or distant. I think it’s the same with tarab,” she nods to Allami, “because very often when you see modern performers revisiting these forms, it’s very intellectual … treating it with a bit of condescension, like something primitive or traditional.”

“There’s two things that have started to become clearer as the work has developed,” Allami says.

“Things that we see as ‘deconstructed’ are actually more a magnification of certain elements that were already present within the tradition. Silences, for instance, these moments to ponder the phrases, are actually intrinsic to taqasim and Quranic recitation.

“As the speed of the world has increased, those moments have become shorter and shorter. I guess what we’ve done is say, ‘Actually we like those moments of silence that allow performers and audience [members] to ponder for a moment, or linger in a particular feeling before moving on to the next thing.

“The moment Yalda falls and starts screaming,” he continues, “what she’s singing is actually almost a copy-paste of a flamenco recording that she introduced to me. … It’s not like, ‘Oh now she’s shouting flamenco in this really punk way.’ Actually that punk approach exists in a specific kind of flamenco.

“With regards to the actual language that we’re using, for me, what I’m trying to do is find a way to make the grammar of maqam, this Arabic music tradition, feel a bit more relevant to how I feel as an individual today and how I want to express myself.

“If that comes across as being deconstructed, or somehow aggressive or condensed, that’s a reflection of what’s going on around us. It’s a way to formulate phrases that echo somehow what I’m living today, based on that grammar.”

In this respect, he continues, the work is less about deconstruction than reappropriation.

“An element in parallel to silence,” Younes says, “is stillness, which is very present in flamenco and which we explore a lot in this show. There’s a tendency for stillness and slowness to feel very dramatic, [while] joy is very fast and hectic.

“So we were also trying to see if we can find ‘good feeling’ in this fullness, this emptiness, this silence, this calm.”

Younes says that with “Universe” she hopes to form a different relationship with the audience.

“It’s not wanting to give them something from me or dictate or impose or show or impress or seduce or any of that but rather, to create space, a world for them to go … in their own minds.”

Not dictating the audience’s destination, she muses, has provoked a wide range of readings from different audience members.

“We’ve heard a lot of feedback, from forests to death to punk,” she smiles. “That’s beautiful. I think it depends on each person but it also depends on the moment you see it how your day was, say. So it allows that space for internal contemplation rather than trying to imprint an image on the viewer’s mind.”

“It’s trying to be less imposing,” Allami adds. “There isn’t a very specific narrative. We’re not trying to impress with theatrical-style images. It’s really about trying to create that moment in time, rather than something that can be captured in a photograph.

“One of the most beautiful moments for me [in last Saturday’s show] was the very end, when everyone was still, and quiet. This very rarely happens in this city.

“Our experience in France was very different. There was a lot of silence all the time. Here, it took a lot of time for that silence to take hold. Then at the end of the show when everything was still, it was really magical.”

The online publishers  is a powerful online network and infrastructure