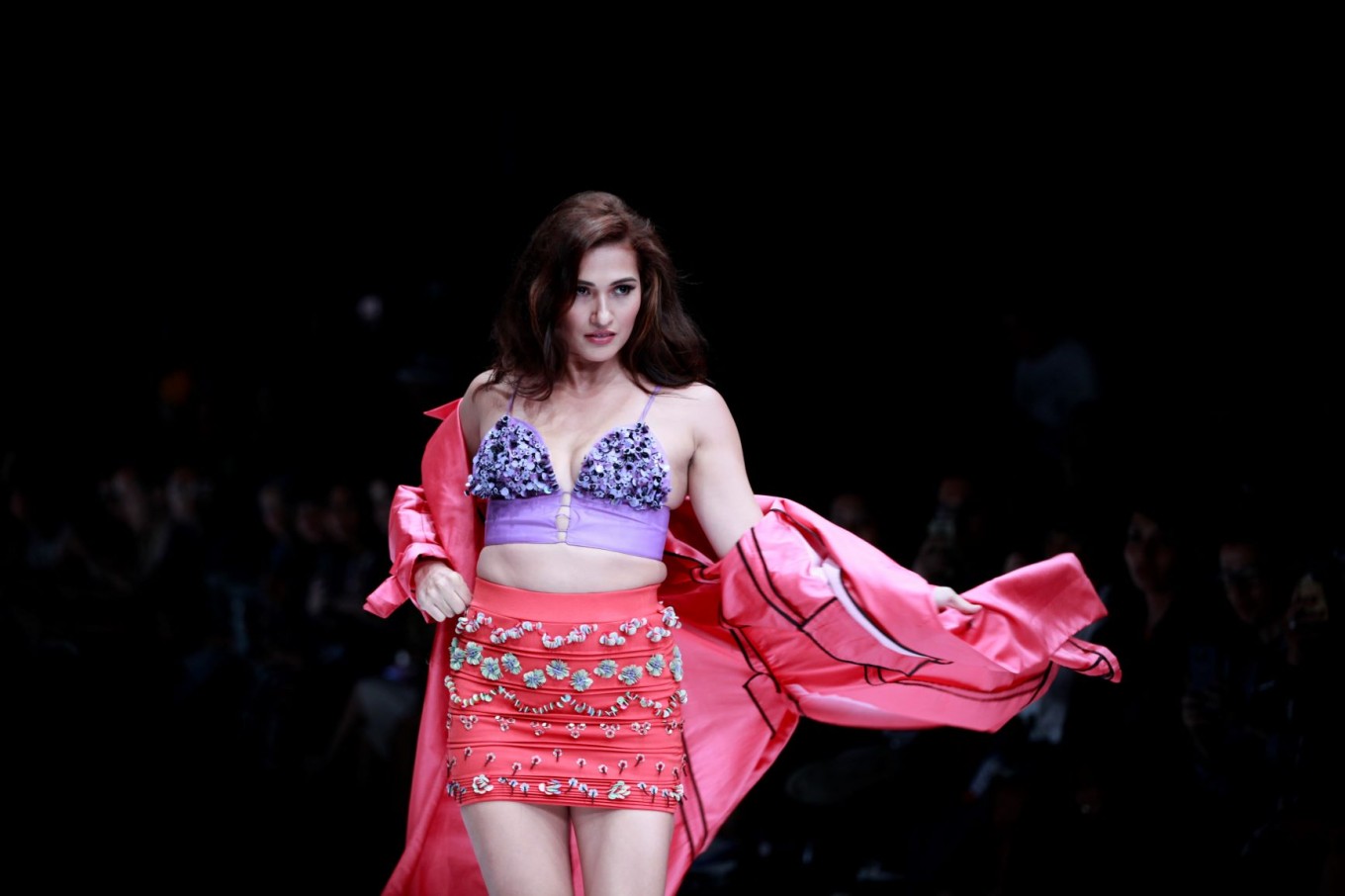 “They thought we were all about traditional or artisanal products.”

So quipped my businesswoman friend Racquel who recently assisted a small French business group to see the fashion potential in Indonesia.

I chuckled, not entirely blaming that group for holding the stereotype. Except for select industry insiders who have regularly attended our fashion events or met our designers at overseas trade shows, others might buy into our tourism ads that always highlight heritage-based products.

Not that I don’t sincerely support traditional products that not only preserve our heritage but also provide much-needed employment. But I thought this year I’d keep my Jakarta Fashion Week (JFW) notes on the contemporary side — just in case Racquel needs a reference for other exporters soon.

Digital print has been all the rage, marked by EPSON’s involvement in JFW and Indonesia Fashion Week (IFW) in recent years. What has been a blessing for one designer’s wild imagination has also burned others who let the print machination’s capabilities overtake creative control, as I’ve witnessed.

Alex(a)lexa, Jii by Gloria Agatha and Klé are good examples of good creative ideation and execution using printed fabrics over the years, digital or not. Already amassing quite a loyal following, their respective Spring-Summer 2020 collections unfurled during JFW seemed set to sell well.

Tities Sapoetra, who has relied on digital print since he started designing, this time wisely chose images and colors to produce a balanced collection. Amot Syamsurimuda, on the second leg of his career, brought out a good menswear collection that not only redeemed his past misstep but also served as a reminder to all that what matters is the strength of design concept, not the loudness of the visuals.

Friedrich Hermann returned to JFW’s runway after a noticeable absence, offering a juxtaposition of utopia and dystopia, citing George Orwell’s works as inspiration. Yosafat Dwi Kurniawan based his latest work on cultural appropriation harking back to the colonialist view of the “Oriental.

Having enough experience under their respective belts, each designer put out a decent collection, yet, with them having cited such lofty references, I expected more Orwellian rebellion in Friedrich’s collection and more pronounced sarcasm in Yosafat’s. I believe both could have been more pointed without messing with their design DNA.

On its first foray into JFW, long-running design school LPTB Susan Budihardjo selected a coterie of alumni to represent. Abirani deserves a mention for the well-proportioned play of colors and silhouettes while Sonia Angela earned praise for designing stylish officewear – a rewarding category Indonesian designers too often thumb their noses at, but then complain when Indonesian corporate warriors with sizable salaries depend on foreign brands.

The winds of change are blowing. Major Minor, long known for structured monochromes, and Danjoy Hiyoji, loved for playful takes, both made a turn into the feminine lane.

With much of its clientele being male, Danjyo’s gambit makes an intriguing watch. Major Minor, on the other hand, sounds more certain of its future after the arrival of a garment manufacturer investor that gives its designer Ari Seputra full creative control and access to the end-to-end clothing making process.

For the Indonesian fashion world, which is still deprived of the industrial bridge to qualified manufacturing beyond atelier-sized volumes, this is a cause for celebration.

Yet for anyone who remembers well the business marriages of Emanuel Ungaro to Salvatore Ferragamo and Jimmy Choo to Tamara Mellon in the 1990s, it’s clear that harmony can only be maintained as long as the creative designer who no longer wields a majority in business decisions can prove that the designs deliver financial targets. I personally wish the best of luck for Major Minor, as I want the business model to be adopted more by others so that the Indonesian fashion world soon becomes an industry with its building blocks in place.

Speaking about designing to certain creative cues, Rama Dauhan’s 18 looks in broken white and pale gold, cut in taffeta and chiffon, prove that one can still do a good job of representing the brand identity of a sponsor (in his case, skincare regimen Crystallure by Wardah) without forsaking his own. Rama’s quirky capsule collection with Cotton Ink Studio also looks solid and worth checking out once it hits store floors by year-end.

Last but resolutely not least, the juxtaposition between Kraton by Auguste Soesastro and Mel Ahyar during Dewi Fashion Knights (DFK), JFW’s closing and most prestigious show.

Auguste Soesastro is a trained couturier also boasting an architectural background, resulting in the Kraton brand that has become a synonym for the elusive balance between dependable structure and elegant fluidity. Mixing Javanese elements into his sportswear-nuanced collection in the brand’s signature muted palette, on its 3rd trip on DFK’s runway, Kraton again showed a fine example of not only a well-thought body of work but also a strict adherence to first-class craftsmanship.

Mel Ahyar, on the other hand, behind her all-black garb and sunglasses, is inherently a mix of crazy colors, vivid visuals and tricky textures, which she freely blasted during DFK.

Meant as a criticism to the many masks we often wear on social media, each of the 16 models she let loose on the runway represented a character with its own fashion wardrobe, mood makeup, and coiffure arrangement, collaborated with Thornandes James, one of Indonesia’s most disciplined fashion stylists.

The catch for unbridled show of force is either you grandly make or miss it. And Mel Ahyar, on its first admittance to DFK, decidedly made it. What is fashion without some insanity fueling the business humdrum, and to close the 12th JFW, Mel Ahyar gleefully provided it with a bang.(ste)

— Lynda Ibrahim is a Jakarta-based writer with a penchant for purple, pussycats and pop culture.

How to Work as a Freelance Journalist?

2 Benefits To Getting Reviews Through TOP.

One Reason You Should Partner With TOP Today. To more >>> online translators platform.

3 Reasons Why You Should Trust TOP For Finding Translation Services.