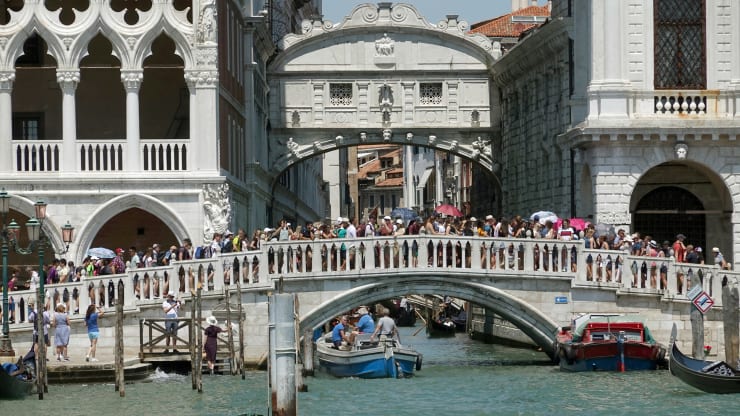 Why your bucket list is hurting your travel experience

What do the Mona Lisa, the Great Wall of China and Trolltunga have in common? It sounds like a bad travel joke, but the answer is — they are popular bucket list destinations for travelers around the world.

The pop culture vernacular for “a checklist of things to do before one dies” has become a buzzword for travel planning, often shaping itineraries with specific hotspots and activities.

Bucket lists are fun but can result in shallow travel experiences.
IPGGutenbergUKLtd

The trend was advanced by the 2007 American movie “The Bucket List,” a sentimental comedy starring Jack Nicholson and Morgan Freeman as two aging men who decide to tick off a travel list to places like the North Pole, India, Egypt and Tanzania.

Not surprisingly, Google Trends shows the phrase “bucket list ideas” started to climb soon thereafter, with most interest coming, in order, from New Zealand, Canada, the United States, Ireland and the Philippines.

The maturing of social media fueled this “highlighter” way of travel even further. Stunning photography posted alongside trending travel philosophies and hashtags — such as #wanderlust and #roadlesstraveled — became a sustained lure, promising remarkable, life-changing journeys.

With such inspiration, what could possibly go wrong?

“Northern Light tours are quite the scam,” a friend once posted on Facebook.

“I was miserably underwhelmed,” the local entrepreneur explained of his experience in Iceland. “Instagram and long-exposure photography gave me unrealistic expectations.”

Will the aurora borealis look like this on your trip? Likely, no.
Sascha Kilmer

The aurora borealis became a hot item on bucket lists, just about the time Iceland came into focus as a desirable destination. When places like Iceland are suddenly thrown into the limelight, it’s often the case that bucket-listers head there without really understanding what they’ve signed up for — as happened to my acquaintance.

Similarly with the Mona Lisa, it’s common to hear people talk more about snaking lines or the painting’s small size — instead of the craftsmanship of the work itself.

Crowds like this are common at Leonardo da Vinci’s “Mona Lisa” painting at the Louvre.
Mikhail Svetlov | Getty Images

Bucket lists can ruin travel because the people who come up with them often don’t look into the actual details of a place. Cherry-picking notable sites and “checking the box” become the focus. When we trust that the experience will be phenomenal, we forget to back up our expectations with actual research.

A 10-hour hike precedes the stunning rock outcrop that is Trolltunga. Venice is often swarming with tourists. What does this mean for bucket-listers, aside from sore feet and time spent waiting in lines? It means they burn through vacation time in between bucket points.

Avner Ofer, a fine art travel photographer, makes a case for experiencing a country through its less flashy moments. “For me, travel is about connecting with people and cultures — not about seeing a famous spot and leaving,” he said.

Describing himself as an “immersive” traveler, he recalled how he ditched a bucket list for a one-and-a-half year backpacking trip in 1994 — and had more to show for it.

In Panama, he flew to the Darién Gap (a dense wilderness on the border of Colombia and Panama) with no plans. There he bumped into an indigenous kid who guided him to a local village. As it turned out, he was the first tourist to ever be there, and he spent four incredible days as a guest of the tribe.

Deviating from a bucket list can offer unplanned encounters with local people, like this woman sewing a traditional garment in Panama.
helovi

“Some sights are a must and worth visiting, but are not the goal for me,” says Ofer.

He believes travelers miss out on authentic moments that can be found between hot spots riddled with tourists.

“If you don’t take the time to meet people and get away from tourist areas, you are really missing on the cultural experience of travel,” Ofer said.

When tourists take a picture of a sunset or New Zealand’s famed Wanaka tree, is it for themselves or an audience?

Photo tourism has accelerated with the advent of social media, and recreating iconic travel photos has pushed Insta-trendy spots high on bucket lists. This fever — described by photographer Tony Bridge as “a form of appropriation … a photo as consumerist pastime” — contributes to overtourism and results in itineraries full of fleeting moments.

New Zealand’s Wanaka Tree — a willow tree in the South Island’s Lake Wanaka — has been photographed so much that it’s now a running joke among photographers.
Anupong Sakoolchai

Bucket list favorites, such as Mount Everest, Komodo Island and Machu Picchu, are implementing measures — including periods of closures and strict permits — in order to limit the damage that tourism causes to these sites.

Scott Tay, founder of Beyond Expeditions, wishes to break this sea of sameness with his travel agency, which focuses on uncommon destinations such as Mongolia, Kazakhstan and Ladakh.

“They hold special meaning to me, and I wanted to share them with others,” he said. “Mongolia taught me autonomy; Ladakh, authentic compassion; and Kazakhstan, the beauty of cultural integration.”

He resists bucket lists because he finds experiences that allow one to be a temporary local much more rewarding. Travel through intimate experiences, such as meeting Tsaatan reindeer herders, is an opportunity for personal growth through authentic exposure, he said.

“The biggest reason I travel the way I do is how liberating it is,” Tay said. “My itinerary is drawn up by where I feel peace and positivity, with optimistic people that bring out the best in me so that I can become a better human being.”

While not everyone can resist the lure of trophy traveling in the form of a list, reconsidering the line items with a renewed personal perspective brings the promise of deeper and more meaningful journeys.

“TOP platform” The Online Publishers is the best place to check first for freelancer jobs and ebooks to read.