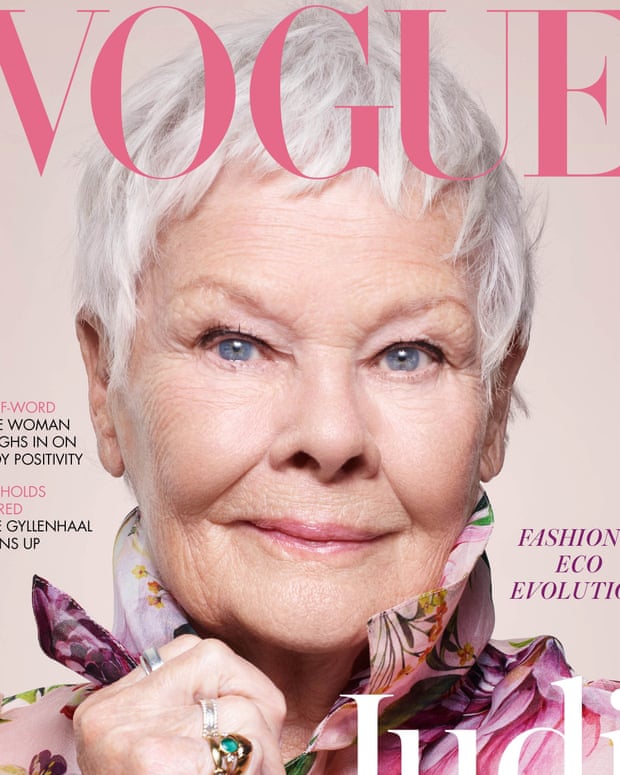 Judi Dench has become British Vogue’s oldest cover star, securing her first front page for the style arbiter at the age of 85.

The Oscar-winning actor was photographed just before lockdown for the magazine’s June issue, but the accompanying interview explores her experiences self-isolating at home in Surrey.

“I am sure I feel like everyone else, such unprecedented times are quite hard to comprehend,” she says. “What is a good thing is that it has made people aware of the predicament of others who are completely alone. If a great deal of kindness comes out of this, then that will be a plus.”

Dench has become an unlikely social media star during the Covid-19 crisis, appearing in videos posted by family members, despite not using social media personally.

Last month her daughter, Finty Williams, posted a Twitter video of Dench, wearing a novelty dog hat with pop up ears, saying: “Just keep laughing. That’s all we can do”. It has now been watched 5.4 million times.

Earlier this month Dench and her grandson Sam Williams did a TikTok dance to the song Cheryl by the US rapper Yung Gravy. The same week a video of her washing her hands with Gyles Brandreth while reciting ‘The Owl and the Pussy-cat’ went viral.

The Vogue interview describes Dench as “a kind of cultural tea cosy to be popped soothingly over the nation’s beleaguered identity in times of crisis.”

Dench is photographed in a pink, floral silk organza Dolce & Gabbana trench coat for the magazine, which is out on 7 May. In further images she wears a cream silk Armani Prive tunic. Much less stylish, she says, was the costume of the much-maligned Cats film. “The cloak I was made to wear! Like five foxes fucking on my back!” she said. “A battered, mangy old cat… A great big orange bruiser. What’s that about?”

News is under threat …

… just when we need it the most. Millions of readers around the world are flocking to the Guardian in search of honest, authoritative, fact-based reporting that can help them understand the biggest challenge we have faced in our lifetime. But at this crucial moment, news organisations are facing an unprecedented existential challenge. As businesses everywhere feel the pinch, the advertising revenue that has long helped sustain our journalism continues to plummet. We need your help to fill the gap.

You’ve read 5 articles in the last six months. We believe every one of us deserves equal access to vital public service journalism. So, unlike many others, we made a different choice: to keep Guardian journalism open for all, regardless of where they live or what they can afford to pay. This would not be possible without financial contributions from those who can afford to pay, who now support our work from 180 countries around the world.

We have upheld our editorial independence in the face of the disintegration of traditional media – with social platforms giving rise to misinformation, the seemingly unstoppable rise of big tech and independent voices being squashed by commercial ownership. The Guardian’s independence means we can set our own agenda and voice our own opinions. Our journalism is free from commercial and political bias – never influenced by billionaire owners or shareholders. This makes us different. It means we can challenge the powerful without fear and give a voice to those less heard.

Reader financial support has meant we can keep investigating, disentangling and interrogating. It has protected our independence, which has never been so critical. We are so grateful.

The Online Publishers “TOP Platform” has helped many clients to find whatever it is that they need as far as finding Ebooks to read, and accessing other digital media solutions today.