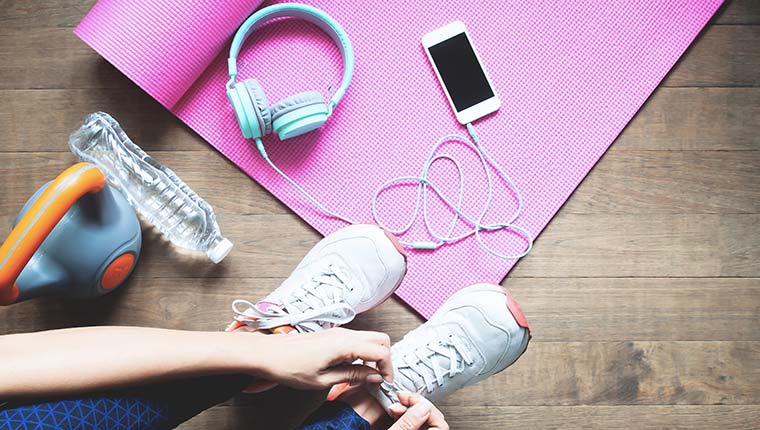 Popular but unqualified ‘fitness professionals’ could be promoting misinformation and unhealthy behaviour, says U of A researcher.

The vast majority of exercise bloggers are not qualified to give the advice they’re giving, according to a University of Alberta study that suggests this lack of certification could contribute to misinformation and unhealthy behaviour, especially since the pandemic has pushed many online for guidance with their fitness goals.

“We looked at some of the most popular fitness and exercise blogs in the world to see what kind of content is being posted, who the authors are and how they’re representing themselves in the online environment,” said Elaine Ori, a PhD candidate in the Faculty of Kinesiology, Sport, and Recreation who conducted the study as part of her PhD, studying with Tanya Berry, Canada Research Chair in Physical Activity Promotion.

“What we found was the majority of the writers don’t really tell us who they are, or what they know, just that they are ‘fitness professionals,’ and that’s about it.”

For the original study, Ori examined 194 popular English-language fitness and exercise blogs, with a focus on blog authors.

Ori found that only 16.4 per cent of bloggers reported having fitness or exercise certifications although 57 per cent reported being fitness professionals. Further, Ori said she could only find evidence of post-secondary education in a related field like kinesiology for 11 bloggers.

“There are a lot of people portraying themselves as exercise professionals in the online environment, but they’re quite ambiguous about what that means,” she said. “They’re taking advantage of the state of the exercise and fitness industry, which is generally unregulated.”

She said the lack of regulation means people can take a weekend course and call themselves exercise professionals alongside those with graduate degrees in the exercise sciences.

“This brings the content into question, because we don’t know what kind of advice they’re giving people, and whether it’s dangerous or helpful,” she said.

In a pair of followup studies, Ori asked participants their opinion about the credibility, believability and trustworthiness of the content, and whether they would be willing to act on the information being portrayed.

In one instance, Ori, who is also a clinical exercise physiologist, selected an article from a top blog specifically because it contained a combination of correct and incorrect exercise information. She showed half the participants the original article and the other half a corrected version.

At a subconscious level, the participants believed the articles about the same, she said. However, when they were asked outright which one they believed more, they said they believed the original, incorrect article a little bit more.

“Most of them said they do believe the information, or at least some of it, but weren’t necessarily committing wholly to it,” said Ori. “Rather, they might believe this information but only to get them going or as a starting point to look up other ideas and exercise modalities.”

To that end, Ori said there is no doubt exercise blogs can be great sources of community support, especially for people who don’t have that social support in their regular lives. They also can be helpful resources for people who are already excited to learn about regional or local events, opportunities and new trends in fitness.

However, she warned that people should be careful about unknowingly undertaking some of the exercises prescribed on the blogs—especially if they sensationalize results, such as blogs that contain headlines in the same vein as “5 easy exercises to get your best summer body.”

Specifically, Ori said far too much exercise-blog content talks about exercise for fat or weight loss, muscle size increase for men and muscle toning for women.

“It could be argued that this is a way to relate to a broader audience. But as fitness professionals, we want to steer away from that,” she said.

“If people are only uptaking exercise for those appearance ideals, they may be disappointed when they don’t achieve those ideals as quickly as they’re told they can, and they might shrug off exercise.”

Instead, she said the message needs to be that there’s much more benefit to exercise than just how you look, like better stress management, improved sleep quality and reduction of risk for chronic disease, to name a few.

“We also want to make sure people understand that health and fitness is not one-size-fits-all,” she said.

She added some information in blogs can be based on current trends, but those trends might be damaging for someone new to exercise. Ori pointed to the CrossFit fitness fad that took gyms by storm a decade ago but also ended in injury for many.

“If people aren’t aware that certain modalities take time to build up to, and get injured after they jump in wholeheartedly, we’re back at square one with people who aren’t participating in exercise,” she said.

And though blogs aren’t thought of as an important source of information in the exercise sciences, Ori said previous research shows they generally serve as a primary source of information. Her studies have also shown that as many as 90 per cent of exercise bloggers use social media platforms to promote their content.

“These so-called fitness experts are using their blogs to function as an encyclopedia for their personal social media platforms,” she said. “Their reach is a lot bigger than people think.”

Backlinks help in boosting SEO because search engines give higher priority to websites that have numerous backlinks with good quality. So what determines the quality of a backlink? THE IMPORTANCE OF BACKLINKS AND ANCHOR TEXTS